Tag Archives: how do i show instead of tell?

Writing with Style 3: Another Point of View

About a week ago I read a post about showing vs. telling. Now, I know what you’re thinking: there are thousands of bloggers who’ve written about the values of descriptive writing. If somehow you haven’t read about showing vs. telling, check out this link to the blog post I read: BLOG POST. He does an awesome job both defining the terms and providing original examples. 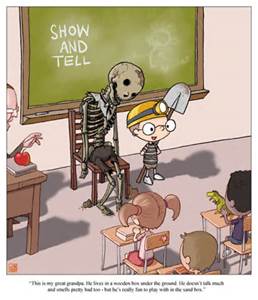 However, I think most explanations fall a bit short of describing exactly how to make writing more descriptive and less explanatory. Instead, most writers seem to focus on the importance of creating balance.

So, to add something new to the conversation, I’d like to mention a few observations I’ve made about narrative point of view, and the impact that narration has on descriptive writing.

Observation 1: some types of narration are naturally descriptive. Think about third person objective narration. If you don’t know what it means don’t sweat it. Its pretty simple. The objective narrator only reveals what he can sense. The thoughts of characters are off limits meaning that he can only describe the world surrounding the characters. Check out this example by Earnest Hemingway. I just flipped to a random page in The Old Man and the Sea, and this is what I found:

The old man was thin and gaunt with deep wrinkles in the back of his neck. The brown blotches of the benevolent skin cancer the sun brings from its reflection on the tropic sea were on his cheeks. The blotches ran well down the sides of his face and his hands had the deep-creased scars from handling heavy fish on the cords. But none of these scars were fresh. They were as old as erosions in a fishless desert. 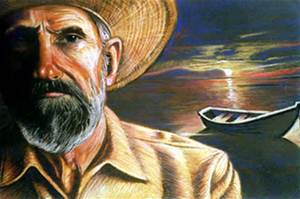 So, what’s going on here? Well, in the excerpt there’s an old man who’s been a fisherman his entire life. That’s it. That’s what its about. But instead of explaining this to us, Hemingway gives a physical description. So, why didn’t he just say, “there was an old fisherman”? Well, if he had said that, we wouldn’t have known the harsh physical side-effects this life style has had on him. And the only way to reveal that with the same emotional impact of the physical description, would be through the thoughts of the old man. But third-person objective narration prevents that. So, the physical description, the showing, the imagery, is the only way for the narrator to represent the impact that fishing has had on the old man.

First person narration can also be naturally descriptive, especially when the narrator is a secondary character instead of a protagonist. Check out his example from One Flew Over the Cuckoo’s Nest. Chief Bromden, the narrator, describes the first time he meet Randle Patrick McMurphy.

This guy is red-headed with long red sideburns and a tangle of curls out from under his cap, been needing cut a long time, and he’s broad as Papa was tall, broad across the jaw and shoulders and chest, a broad white devilish grin, and he’s hard in a different kind of way from Papa, kind of the way a baseball is hard under the scuffed leather.

McMurphy is the protagonist here. Because chief Bromden isn’t the central character, well, at least not in the beginning, most of the narration focuses on what Bromden sees and hears and sometimes smells. He’s no mind-reader. He can’t tell us what McMurphy is thinking. Again, this type of narration naturally shows rather than tells. 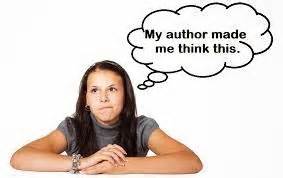 Now look, I’m not saying that telling is always bad. Its great for creating suspense. Many writers will shift into an omniscient point of view to reveal what a character is thinking for this express purpose. The trick, I think at least, is to do this sparingly.

Well, that’s all I have for now. If you have anything to add, respond in the comment section below.

Leave a comment   |  tags: bloggers, how do i show instead of tell?, How to write descriptively, humor, imagery, literature, point of view, writers | posted in Uncategorized