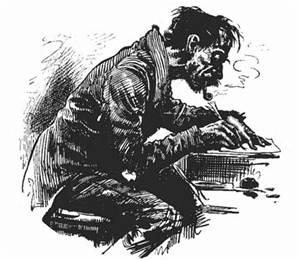 Writing as Art digs deeply into the literary, structural, and poetic devices that make writing an art form. The excerpts and short fiction presented are chosen from a list of submissions sent by authors around the world. The purpose is educational and based off of the idea that we can all learn from each other. I start off the conversation by incorporating annotations every few paragraphs. (These are surrounded by parenthesis and written in bold) But my annotations are only the starting point. I encourage you to comment, critique, disagree, agree and argue the literary merit of each piece.

For this week, we have an excerpt from M. Thomas Apple’s debut novel, Approaching Twi-Night. Enjoy!

She arrived at an overcast Friday noontime, the last day of the homestand, in a tiny red car packed with clothing covering the back windows. Through the balcony sliding doors he watched her pull into the back lot, but he waited until she had come around front and rung the buzzer. He greeted her with a forced friendliness, an awkwardness which attempted to conceal two feelings, one of nostalgic longing, one of unforgiving regret. She smiled and said she felt as if she’d been on the road for days.

(Although it seems simple, there is a lot to say about this opening paragraph. To start off, Apple sets the scene without boring us to tears with explanation. The word “homestand” lets us know that the protagonist plays baseball. No other sport has “homestands”. We also know that he lives in an apartment because she parked in the “back lot” as he looked at her through the “balcony sliding doors.” Apple establishes the mood by describing the weather as “overcast”. Typical, right? Wrong. He’s a baseball player so an overcast sky could mean no game tonight. This establishes a parallel between his baseball career and his relationship with the woman in “the tiny red car,” through a simple juxtaposition. He reveals his mixed feelings for her as, “nostalgic longing” and “unforgiving regret,” which is further shown through his use of parallel structure/anaphora in that same sentence “one of…one of…”. There’s a lot I could say about characterization here, but this annotation has already grown exceedingly verbose. I’ll leave those comments to the masses. One last thing then I’ll move on. I liked the use of alliteration with “forced friendliness.” It makes it feel forced. Great effect)

He made her some coffee. John, Vi said, with some hesitation, is there anything I could eat? A bagel? A sandwich? She’d been living on pbj, she said, picking the mold out of her last grape jelly jar. He acquiesced.

She ate as they talked, carefully treading with conscious discomfort.

John mentioned to her that he had been writing again. But, he muttered, it stunk. It would never be good enough. It was crap. He was crap.

If you don’t think you can write, she asked, why do you bother doing it? She put down her cup and pulled out a cigarette. Do you mind? she asked. Well, I don’t have any ashtrays, he replied. I quit smoking.

(I always think Cormac McCarthy when I see dialogue without quotation marks. It’s hard to do because it can be confusing for some readers, but Apple does it masterfully. It isn’t that each character has a very unique voice, not yet at least. It’s clear who’s talking because Vi is limited to asking questions and John only makes statements. The sparse dialogue also contributes to the bleak atmosphere of the apartment and the bleak prospects of both character’s lives. We don’t know what Vi does as a profession but we do know she’s “living on pbj.” John is a failed writer and I’m starting to think he’s a minor-leaguer meaning that he’s poor and his life isn’t likely to go anywhere)

I didn’t know you ever did, Vi laughed, lighting up. He wandered over to the couch, picked up a random empty bottle from in front of the TV and thought: Two and a half years. We were seeing each other for two and a half years, and you don’t remember that I smoked. He set the bottle in front of her, watching her tip the ashes past the lip, casually. She coughed briefly and lowered her head.

(The use of imagery in this paragraph, “a random bottle from in front of the TV,” adds another layer to the already bleak atmosphere. I’m picturing a beer bottle and I’m questioning why it isn’t in the trash can. Reminds me of college, which was cool back then, but John’s not in college)

Why do you still play ball? she asked, standing up. He opened his mouth to respond to the non sequitur as she took a couple of steps toward the kitchen. Do you mind if I make myself another sandwich? she asked, cutting into his train of thought.

No. No, go ahead, he said, waving a hand. I don’t know if there’s anything left besides bread, though. I mean anything good. Things might have gone bad after our first road trip.

That’s okay, Vi said over her shoulder. She had opened the fridge door, extracted the jam. She continued, I mean, you told me once you didn’t think you were good enough to stay in the majors. So, that means all you can do is play and make numbers in the minors. You know, all those statistics, all those numbers, they’ve all been done before. You’re not going to make it into the Hall of Fame or whatever. All you can do is make more numbers, right?

(Very intelligent use of dialogue. Did you see what he did here? He just asked “What’s the meaning of life” without sounding annoyingly philosophical. Apple tempers the question in two ways. First, it’s Vi who asks the question. Clearly, her voice comes off as informal and innocent. Second, because she’s making a sandwich, Vi seems a bit absent minded)

Stats. Vi had been a psych major, John remembered. Three years younger than him, when he first met her through a mutual friend in Amherst, an opposing pitcher. After an away game during a rainout makeup doubleheader, the second game a fairly good outing for himself, he was introduced to Vi at a party of some sort. John wasn’t good at parties, never was. He just liked to drink and to watch the goings-on. She liked to watch, too, she said in a private conversation. The body is the physical manifestation of the inner person, she confided. You could tell what someone was like through careful examination of material context: gestures, gesticulations, mannerisms, intimate corporeal details of the anatomy.

He had believed her, then.

John brought himself back to his present, surreptitious peeks at Vi, standing at his kitchen counter, cig in mouth, purple-covered knife in hand. What had she told him, at the time? Fifty. She’d been with fifty. I don’t want to be just another number, he’d told her that last time. She looked pleadingly. I can’t help how I feel. I can’t…

(This part brings it all together, his baseball career, his struggles as a writer, and his failed relationship with Vi. If the stats he accumulates in baseball don’t matter and the words he writes don’t matter, then why does the number of men Vi’s slept with matter? The logical development of this parallelism adds to the cynical beauty of the piece)

Fifty-one. How many numbers were there now? John wondered. He supposed she was right. There are no new numbers. 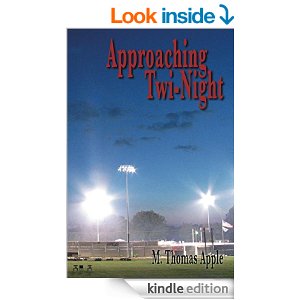 And that’s it. Here’s a link to the rest of the book: Approaching Twi-Night which happens to be free to download tonight. If you have an excerpt from a novel or a short piece of fiction, please e-mail submissions to Ericjamesolson1@gmail.com And as always, please comment. It helps us all out.

Originally from Troy, New York, M. Thomas Apple spent part of his childhood in a tiny hamlet in the Helderbergs and his teenage years in a slightly larger village in the Adirondacks. 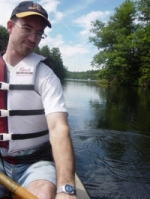 He studied languages and literature as an undergraduate student at Bard College and later creative writing at the University of Notre Dame du Lac, where he wrote a controversial, award-winning opinion column for the student-run daily newspaper, The Observer, while composing the initial draft of what would become Approaching Twi-Night.

After further studies at Temple University, he now teaches global issues and English as a second language at Ritsumeikan University in Kyoto, Japan.

Eric James-Olson writes novels and short stories. Currently, he's working on a coming-of-age novel set in the Panhandle of West-Virginia. Check out the "Novels by Eric James-Olson" tab above for the titles of his other books. In addition to writing, James-Olson is a high school English teacher, an amateur woodworker, and an outdoor enthusiast. He lives with his wife and daughter in West Virginia. END_OF_DOCUMENT_TOKEN_TO_BE_REPLACED
This entry was posted on Monday, February 23rd, 2015 at 8:40 AM and tagged with art of writing, baseball, bloggers, blogs, critique, debut novels, literary, literature, writing and posted in Uncategorized. You can follow any responses to this entry through the RSS 2.0 feed.
« Call for Submissions: Writing as Art
Send me Your Novel Excerpts! »